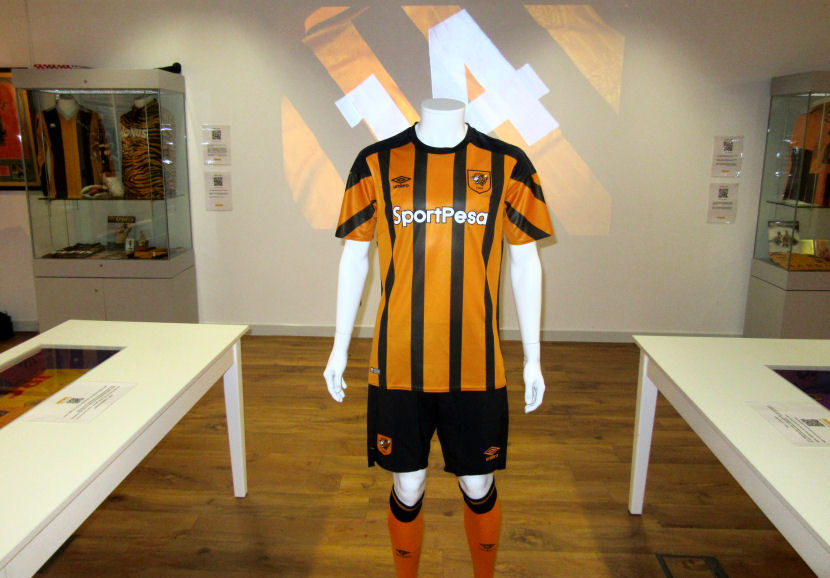 Hull City Kits had the privilege of hosting the launch of the new home kit at our Tiger Rags exhibition at the Streetlife Museum of Transport.

So what did the HCK kitgeeks make of the new Umbro garb? 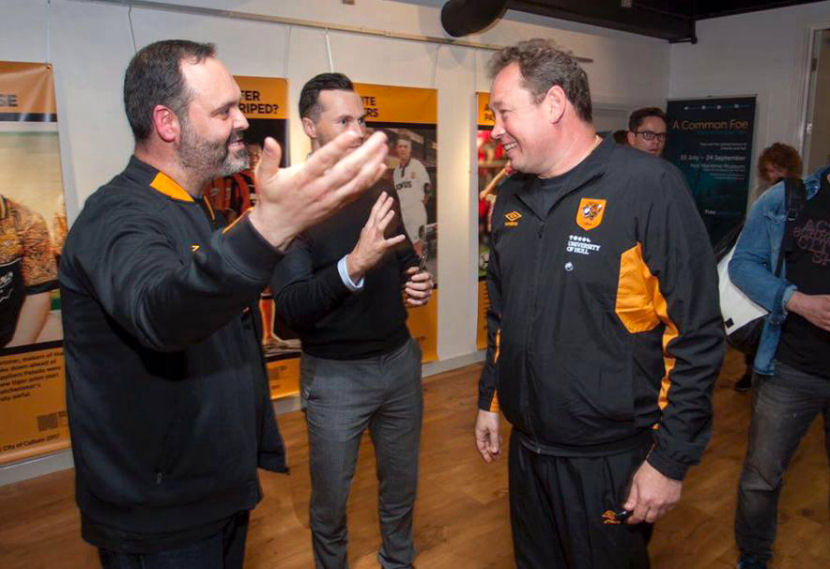 @Sombreethyl: First of all I’d like to thank the club for unveiling the new home kit at the Streetlife Museum while the Tiger Rags exhibition is on, the exhibition celebrates the club’s colours and kit history and the kit launch event neatly shows the continuation of that history. I’m very proud to have been involved, and Leonid Slutsky told me he plans to come back and get a feel for club history, music to my ears.

The kit then… I’d steeled myself for sharing the same design as Bournemouth, but I should have had more faith in Umbro. After all, none of the home kits they’ve given us in recent years, 2014/15, 2015/17, and last season’s, 2016/17 have looked like what other Umbro stable mates were wearing at home.  At a time when other brands are dressing every team in the exact same garments with a colour switch, I find this semi-bespoke approach very refreshing.

I really like this. As a fan of striped shirts I’m delighted that City have plumped for stripes a fifth season in a row. After a season with really thick stripes on a shirt loosely based on the white collared strip from the mid to late Seventies, going thinner is a natural choice and these fairly thin stripes mean there is a lot of amber on show, that’s important, and it feels like a respectful nod to the shirts worn in late 1963/64. As someone who geeks out on club kit history, that is always going to appeal to me.

Now I know some people won’t get on with the oblique sleeve stripes, but I really like them, they give the shirt a dynamic look and inject a bit of fun. People have gotten a bit joyless when it comes to shirts of late, uff uff uffing about templates when every kit is a template of the brand that makes it (some are just seen more than others) and then chuntering when something distinct such as last year’s Cactus Purple is released. Suppliers must think they can’t win.

As a fan of Umbro kits since the early Eighties, seeing the subtle references to their brand heritage fills me with glee, I love the tonal connected diamonds ‘sleeve tape’ woven into the shoulder panels, it looks great. My opinions on the current crest are well documented, but the treatment of it this time round, with a ‘parquet flooring’ effect behind the tiger head, is a really classy touch. I’m also pleased that sponsor SportPesa have allowed for their ‘blue orb’ logo to be omitted and just go with the wordmark, which makes for a much cleaner look than we had last season.

Overall I think this is an upgrade on 2016/17, I could see where that kit was coming from but the collar style bothered me. No such worries here, the collar is unfussy and simple. The shorts and socks keep the 1964 look going, plain black shorts with that lovely Umbro ‘taping’ down the sides and intriguing ‘tails’, the back panel is longer than the front. The 1964 socks had two amber bands on the black turnover cuffs, these have just one. Umbro have gotten the level right, using our kit history as a starting point and giving it a modern twist.

I like this kit a lot, though I suspect @JGHull has an issue with those sleeves… 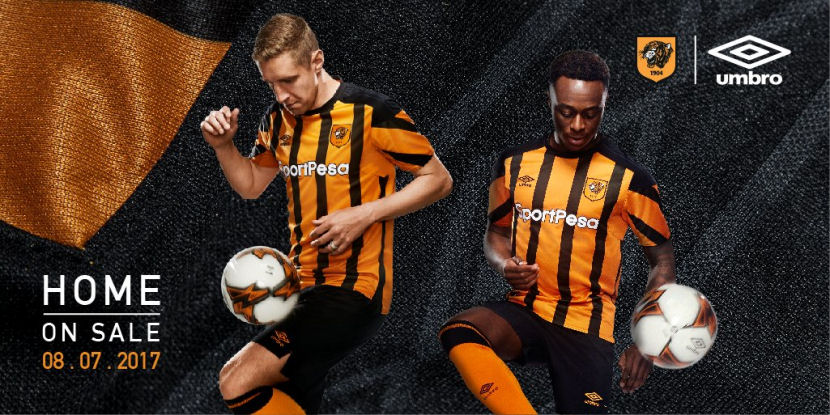 And it goes against my better judgement for several reasons. The spite behind the club identity and the sheer cost of two kids kits should be enough to justify not buying them.

However, let’s make it very clear that the main reason any sensible person wouldn’t want to purchase this particular shirt isn’t to do with cost or club politics. No, it can be summed up in one word with a not so subtle use of capitals.

Who thought they were a good idea? A jaunty stripe?! I bet there is some tenuous link to some design echo of the past or a desire to try and look a bit tigery but frankly, they’re ridiculous.

This next paragraph makes me hypocritical having previously lamented kit design becoming all the same and Nike ruining it etc etc but why couldn’t we have just had the Bournemouth kit? It’s a thing of beauty. Imagine that in amber and black. Swoon.

Not all is lost. I like Umbro’s return to the 70s seaming. It looks ace. I like the treatment the sponsor has had, losing the weird exploding planet S mark that went above the words last year. I actually don’t mind the stripe falling between thick and thin and landing in a sort of “no man stripe land”. We’ve had them before, they’re fine.

But the sleeves are a mess. The ruin it. There’s a weird patchworking under the arm. Chest on, they leave a weird slightly smaller channel of amber thinner then the others that makes my OCD twitch come on. They’ve a weird style black shoulder pad thing going on too.

Fair play for trying something different. It’s great that they tried. However, they should have tried it, pulled faces at one another similar to those faces pulled when one sucks on a lemon and then got the Bournemouth one off the shelf. 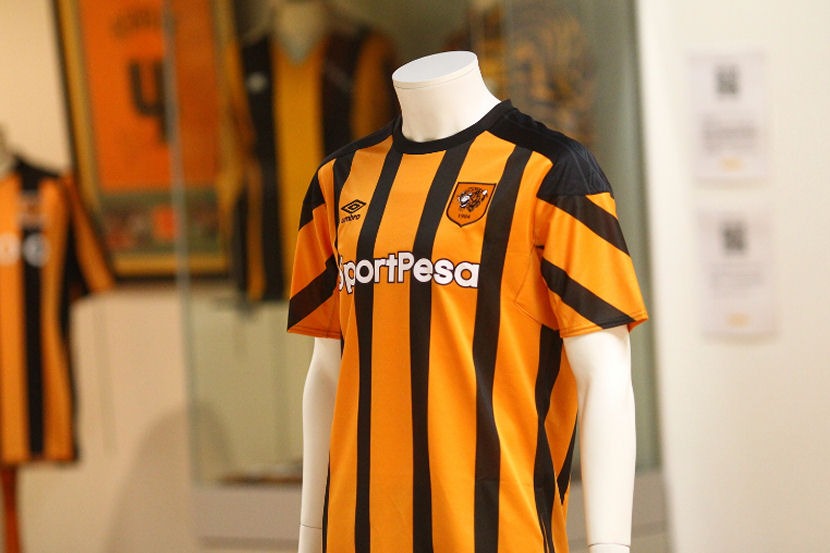 @HullCityLive: Simple verdict: The new Hull City kit gets a thumbs up.

I was lucky enough to attend the launch event at the Streetlife Museum in Hull. Held in conjunction with the excellent “Tiger Rags” exhibition of our kit history – it was a great bit of fan interaction. The club gave fans the opportunity to see the “Tiger Rags” exhibition and the club’s, ahem, trophy collection and an opportunity to meet the new manager and players Evandro, David Meyler and Will Keane. They also provided food and drinks and a welcoming atmosphere.

It was nice to have the opportunity to judge the kits itself in the flesh and the reaction seemed positive from those in attendance. I’m a big fan of our recent pinstriped shirts from 2009 and 2015 but this year’s shirt takes it further with the solid black stripes breaking up the mass of amber and I really like the effect. It’s similar to the kit worn in 1963/64 but the black stripes are thicker than that one too.

The dilemma I’ll continue to have when it comes to purchasing the shirt (or any merchandise whatsoever) is the badge. I’ve no issue with the design of the crest but with the spiteful reason for its existence. It’s becoming less of an issue the more the failed attempt to rebrand the club feels like a distant memory but it still nags away. The only other thing I consider a negative is the shade of amber which is a little too close to orange on the scale for my liking but not enough for it to be a big issue.

The sleeves will cause some contention and the debate was already raging at the launch event but they look fine. Different but fine. The obvious join between the sleeve and the side of the chest is more of an issue for me than the irregular stripes on the sleeves. I’ve only seen a short sleeved version but I do wonder if those striped will look really peculiar when the players sport long sleeves.

The shorts are very plain but inoffensive. The WWF logo is a little gaudy but it’s there for a good reason so gets a pass. The socks have a black band with amber detailing around the top which breaks up the monotony.

As well as the nice effect of the thick amber stripes and the solid but thinner black stripes, there are several other positives. The sponsor’s logo for SportPesa has been massively improved from last season with a bolder font and the removal of the ugly blue “S” logo. The new Umbro detailing on the shoulder is a nice touch. I’ve liked it on all of their kits so far. The black on the shirts and shorts matches much better than on last years and the stripes being the same on the back as the front is good news too. I prefer a collar but after last season’s monstrosity, a simple black round-neck is welcome.

Many fans would have complained if we’d got a template kit but I’d still have preferred a black and amber version of Bournemouth’s Umbro shirt for next season. It would have been a better version of the 1999/00 home shirt. This runs it a very close though. The striking stripe pattern is certainly unique amongst our modern kits.