Umbro have unveiled the primary kit City will wear as they adapt to life back in the Championship in 2015/16. Here’s what the HCK kit geeks make of it…

SombreEthyl: “This kit is somewhat like the Curate’s egg, in that parts of it are excellent.

The collar for example, I utterly love 80s style wrapover V-necks, so I’m delighted to see a City shirt with one. The amber socks with black bands, I like those a lot too.

The rest of it? It’s ok, but it doesn’t excite me. A pinstriped Umbro home shirt? We only have to go back 7 years for one of those, which means the black sleeves were a necessity to save this shirt being a carbon copy of the 2009/10 edition. Pinstripes are quite attractive, but I’ll always tell you that I prefer bold striped shirts.

The reason I prefer amber and black striped home shirts is because they visually scream ‘Hull City’, even when the club name is not featured anywhere on the kit (like, err, the one this kit replaces). When you go with solid amber shirts, or nearly solid amber by featuring pinstripes, then no matter how lovely the design (and Umbro’s 2009/10 pinstriped shirt was beautiful) it’s hard to not subconsciously think “it looks like a Wolves shirt”, and this one really does, look!

The more vivid shade of amber used since the start of last season really compounds that. I can understand the logic of wanting to match the shirt amber to the Pantone used in publications, but it feels like the tail is wagging the dog. The publications Pantone should be changed to match the shirt amber, not the other way around, or maybe we just all need to accept that colours look slightly different dependent on whether they are applied to fabric, seen on screen or printed onto paper.

The newer amber tone is deeper than we’re used to in recent years, more orangey than that used by adidas (2010-2014) or by Umbro first time around (2007-2010), but it’s less jarring when used with striped shirts such as last year because of the contrasting nature of dark and light(ish)stripes. When there is a solid block of the new amber though (and pinstripes don’t stand out over distance), it seems noticeably deeper, and therefore nearer to what Wolves term Old Gold. I don’t care that there’s a slight difference to the amber when printed on white paper, it has to be deeper there to truly stand out, but when on a shirt and contrasted by black stripes or trim, I prefer the slightly lighter shade used before 2014/15.

The shade of amber, like the crest and the sponsor, can be pinned on the club rather than Umbro. Some people like the updated crest because it’s minimalist, and usually I’d plump for minimalist design over complicated visuals, but the crest exists only because our owners hate our 111 year old identity and won’t put the club’s actual name on a kit. For that reason alone the crest stinks and I long for a crest with Hull City AFC on it.

Flamingo Land’s logo appearing on the shirt is once again a club decision and nothing to do with Umbro’s entirely workable home kit design. I’m not snobbish about the company sponsoring us, I think it’s entirely preferable to the hock shop we had blighting three adidas shirts. I do find it funny however that the owners insist we can crack the Asian market with a name change and yet end up with a North Yorkshire zoo/theme park as sponsor. We can be thankful though that their logo has been applied in the least aesthetically displeasing manner, given that it could have been on an utterly incongruous green patch.

The shorts are (like last years) very basic, nothing wrong with that, and the thin amber hem band visually connects them with the black shirt sleeves, which also have amber tipping bands.

Overall then, this is a decent enough kit. I don’t think Umbro have supplied City a poor home shirt, but it was always going to be tough to top their 2014/15 home kit which was just a crest with Hull City AFC on it and hooped socks from utter City kit perfection.

I have big hopes for the away kit, which I believe to be traditional white, and if it has the 80s style wrapover V-neck, I think I’ll like it more than the home kit.  One last thing, why do players have to do that stern look to the camera thing nowadays? Dawson, McGregor and Robertson look miserable as sin, which makes you wonder ‘do they hate this shirt?’ or ‘Are they gutted to still be at City by the point kit photos are taken’, it’s just ridiculous. Look at Andrew Robertson’s face! He looks like he’s just been forced to watch his cat eaten by jackals. A wee smile would not knack the kit reveal. Oh alright, maybe a McGregor grin would, but can we inject a bit of joy into kit releases (and no I don’t mean those quarter hearted fake goal celebrations sometimes used) or at least drop the existential stares? Ta.” 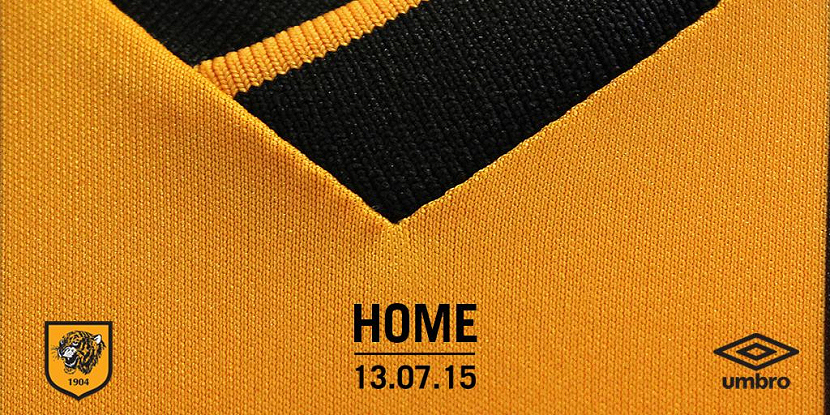 JGHull: “Pinstripes then. Not my preferred choice but we’ve worn them before and I understand the reasons for bringing them out again. Let’s face it, trying to design with bold striping year in, year out gives the manufacturers a problem in making them significantly different from the year previous.

Having said that, making one pinstripe shirt different from the previous incarnation is also a difficult trick which is why I suspect the black sleeves have been introduced. It also has a thicker solid black stripe under the arm running the length of the shirt. Does this in turn lead to an amber back? From these images, it’s hard to say conclusively but there’s a glimpse of amber under Robertson’s arm so I suspect so. I understand the commercial reasons for the black sleeve but I’m not sure about it at first view. Perhaps it’ll grow on me in the flesh.

I’m a fan of the shorts and sock combo with minor ‘hoopage’ appearing on the socks. I’m a fan of a hooped stockings (do your own jokes) but this one hoop coupled with a pinstripe shirt works well.

The sponsor? Given the current climate at the club and the lack of positive stories recently (name change malarky, Airco, relegation…), I’d have loved them to give the chest placement away to a local charity. The last minute nature of the deal must mean that the revenue from it is relatively minor compared with previous years and in light of the parachute payments, perhaps we could afford to be different this year. The Allam family are known to be incredibly generous with charitable donations and perhaps this was a bit of an opportunity missed. Just a thought.

Having said all of that it’s a Yorkshire based family attraction and not a betting firm or pawnbrokers so I’ve absolutely no issues with it despite all the puns it’ll provide the journos with. It’s tastefully done too and sits on the shirt without causing any design headaches. Happy days.

Just that badge to talk about then. Sort the typography out (1 904?) and it’s not bad in its own right. However, it will always be associated with the name change and for that, I can never be a fan. I’d love to see our full moniker rightfully in place on our club crest. In time? Fingers crossed.

Overall, it’s smart and Umbro rarely let any club they deal with down but I’ll never truly love it. For me a City kit is a bold stripe, black shorts and a hooped sock affair and suspect that’s what we’ll see next year given the pinstripe/bold strip rotation. Maybe even next year, we’ll see our name reappear on it too.”