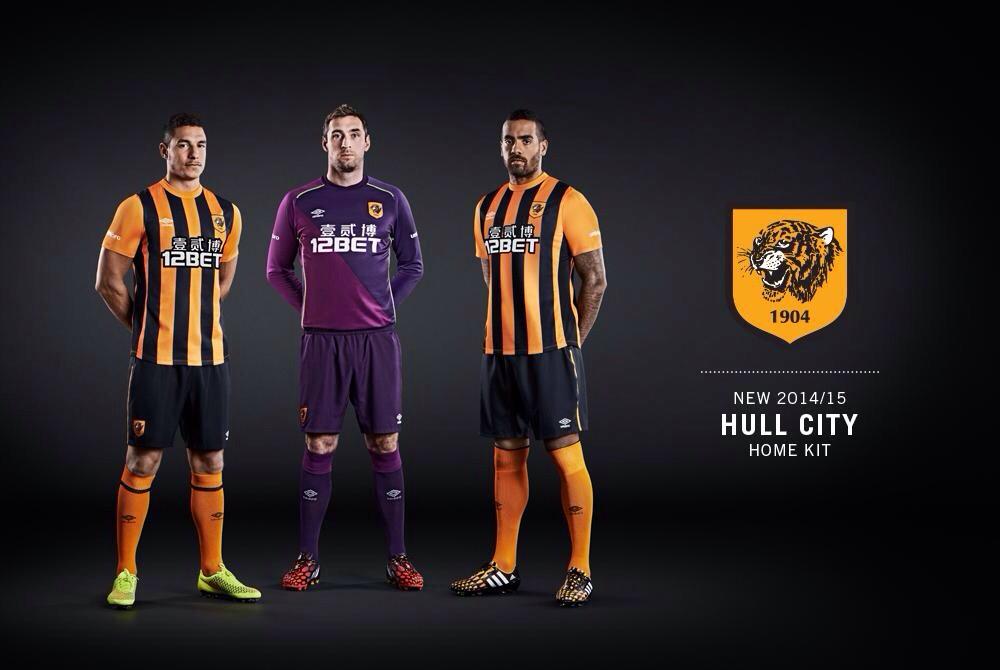 The wait is over…Umbro have unveiled the primary kit City will wear both home and abroad in 2014/15. So what do the HCK kit geeks make of it?

I consider the 1990-92 Matchwinner home to be the ideal City shirt; bold stripes with plain amber sleeves. Or at least, I did. This, I think, employs that look even better, it screams ‘HULL CITY’ even if the badge doesn’t carry the name.

As far as Umbro’s remit goes, they’ve nailed it, it’s a classic looking City kit with some neat technical features (such as the small white disc topped ventilation holes on the back). Simple round collar, lots of stripes that aren’t too thin, and solid amber sleeves to brighten a shirt that could look quite dark if the sleeves are striped too, or as they have been at times, solid black. Amber is the most important tone in our colour scheme, our kits should be bright, even with a striped shirt, and this is the way to achieve that.

Similarly, the socks should have lots of amber in them too, and if we aren’t replicating last years gorgeous hooped socks, then all amber is the next best thing. The thin black stripe on the foldover band complements the simple and elegant black shorts, which have an amber stripe of the same width on each side. 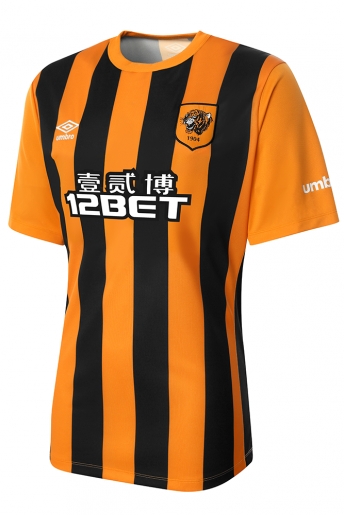 The image leaked the day before the unveiling (grr, I hate grainy leaked pictures that have people on Twitter slagging off details they can’t see properly or may well have since been changed) showed a shirt with wonky alignment of the Umbro double diamond and club crest, that seems to have been put right, as has the sponsor, which was on a black background that did the shirt no favours at all.

The sponsor then… I have no problem with betting firms advertising on football shirts (I don’t like shirt advertising full stop, there are plenty of ways to be sponsored that don’t involve turning a team’s primary identifying mark into a billboard, but hey ho, this isn’t the time for that debate), so 12BET is a significant improvement on a pawn shop/payday moneylender.

My concern then is whether a sponsors logo affects the visual integrity of a shirt by being too big, or using colours that clash with a teams palette. With the earlier black background plate that was the case, but now that the sponsor is applied as white text with a black background, 12BET’s logo doesn’t look intrusive, and I actually think the logographic Chinese text looks cool. Nobody with Hull City’s interests at heart has opposed the club trying to tap into the Asian market for sponsorship, they just don’t think changing the club’s name to that end is worth that or necessary, and seeing hanzi text on a City shirt proves that.

The crest then… Y’know, as a shirt badge, which is often different from a club crest or a single element of it (think Arsenal with just a cannon, or City from the 1940s-1970s with a scraggy looking tiger that never appeared anywhere but on the shirts), the shield with just the tiger head and ‘1904’ looks alright, although I still think it’s daft to not have the club’s name on the shirt. It’s when you see a nameless crest on the side of the KC Stadium that it looks silly, but as a shirt badge it’s not so bad (it’s better than the awful clipart crab crest from the 1999/2000 shirt, which crest aside, I love) though I’d much prefer the beloved crest used from 2002 till the FA Cup final.

The club have indicated there may be a different sponsor or the club’s charity of the year on the shirts used in Europe, so there is the worry of an intrusive logo yet to be allayed there, but for now I’m very happy with that home kit and I’m looking forward to seeing the club’s own name and numbers fonts for Europe too.” 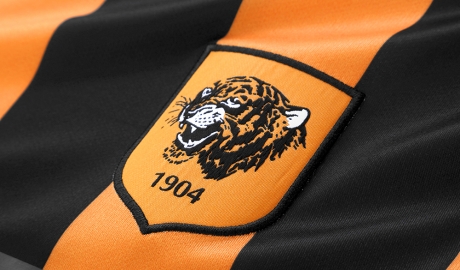 I’ve got to agree with SombreEthyl (which pains us both) but I think Umbro have hit their brief squarely on the head. It’s a gorgeous, bold striped shirt with a simple, slightly old fashioned collar. I like the amber sleeves too. The white Umbro detailing on the sleeve cuff adds a little something. It’s the perfect Hull City shirt.

But I can’t get past the badge.

The new badge actually looks OK in situ and I’m going to leave the politics out of it (but would seriously prefer our shirts to carry our proper name) but what went on with the kerning (designer-ponce word for the spacing between the letters)? Why is the 1 of 1904 so far away from the rest of the numbers? It’s such a simple thing. I’ve seen someone tweak it and post on Twitter and it makes such a difference. 2 more minutes spent on the badge artwork and it would have been so much tidier. I can’t unsee it. I suspect the embroidery may cover it up slightly as it might be hard to replicate at that small size with a needle and thread but look at it at a decent size and the kerning really lets it down. You can see it now too can’t you? Sorry.

To summarise, put the old crest on and we’re done – Hull City shirt design could be ticked off as mission completed. It’s that good. 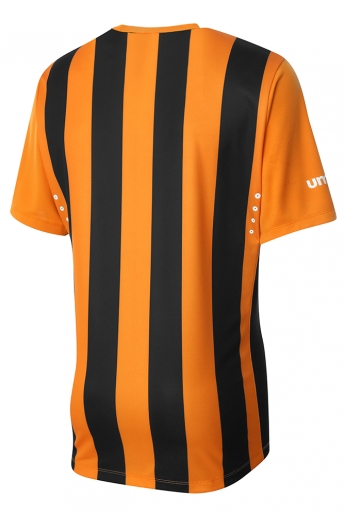 As for the full kit, I’d always have hooped hosiery. Always. It just looks fantastic with the striped shirts. Maybe next year Umbro? However, that’s a minor gripe really.

My last words are reserved for the sponsor. I think the Chinese text looks brilliant. Seriously. A Hull City shirt carrying an Asian sponsor looks brilliant – I don’t really care that it’s a bookies. Let’s face it, the horse has bolted on bookies slapping their names all over Premier League kits but as a logo, 12BET looks great. I’m glad the design was changed from a black sponsors patch across the stripes to an heavy black keylined logo too (the patch being seen on the leak that SombreEthyl refers to above). To top it off, the club seem happy that it’s a great deal for them which frankly makes it a great deal for everyone. An Asian sponsor paying good money and without having to change the club name to attract them is a win-win for everyone.

The leaked images imply the away kit will be all black, which necessitates a third kit. We’re hoping for classy all-white, but when both change kits are unveiled (and here’s hoping there’s no crappy leaks this time), we’ll let you know what we think. Now it’s your turn. Disagree with a our Umbro love-in or ready to jump on the double-diamond bandwagon? Give us your thoughts.