Like a burlesque performer, City have gotten us hot under the collar by performing a strip tease this week. On Monday they revealed the new home kit socks, on Tuesday we saw the shorts, and today we’ve feasted our eyes on the shirt. So now we’ve seen the lot, in all it’s shocking glory, what do we make of the 2013/14 home kit?

A shirt with bold stripes and hooped socks, what is there not to love about this kit? Well, the sponsor for one, but y’know we’ve stated our objections to that deal oftentimes so I won’t re-tread old ground now, and at least it has been applied in the least ugly fashion and there is no appalling black patch across the chest.

The stripes are the perfect width in my view; it’s instantly recognisable as a Hull City shirt which is a great starting point. The contrast striped collar is an interesting look, I’d have preferred a cleaner collar design but I think it will grow on me. The amber yoke panel means the Drei Streifen don’t look messy on a striped shirt and should ensure a better fit across the shoulders.

I like plain amber sleeves on a striped shirt to brighten the overall look, the thick, oblique black sleeve stripes on this shirt create a big expanse of black, but when the Premier League patches are added to player shirts it will break that space up and will look just fine.

The City crest on this shirt is like on the away shirts, a bit smaller than what we’ve had on other City kits. Maybe the scroll banners on the bigger crests fall foul of the Premier League rules on crest size, though it didn’t seem an issue in 2008/09 and 2009/10. The smaller crest bunches up the detail on the tiger head and make it look a bit squinty eyed, which is a shame, though the crest being stitched on rather than heat bonded is a good thing.

The shorts are just fine, the truncated three stripes match how those on the shirts are broken to make room for a competition patch so there is design continuity. Then there is the socks, have I mentioned that I love the socks? I adore hooped socks, and like the adidas brand so I’ve been waxing lyrical about these since they were revealed on Monday. I collect matchworn City shirts, and as much as I’m looking forward to getting a player worn home shirt at some point, I’m more interested in getting some matchworn hooped socks, and yes I know that sounds weird.

Template kits are nothing new, and it’s a fact of life that unless you’re a Chelsea, Bayern or Real Madrid sized club, you’ll share a kit design with other clubs. West Brom use this design as an away kit, that doesn’t bother me at all, but if they use the same template for their home kit I’d be a bit miffed about that. Sunderland and Stoke, the other Premier League sides who wear stripes and have adidas as kit supplier use different templates for their home shirt so hopefully none of the stripy shirted adidas teams will share a template for a home shirt, though there are only so many stripy templates to go round. Brentford’s home shirt looks great from the front, it’s a really clean striped design, but the back is solid white, and I don’t like that, if their shirt was stripes front and back I’d have been happy to use the same shirt.

As for the shirt we’ve got, the positives far outweigh the negatives, and I like this kit a lot, especially those sexy hooped socks (I’ll have ten pairs please).

Credit to the club for building up interest with the teaser pics on social networking sites, that and the reveal using the adidas #all-in slogan has been pretty well done. Contrast our launch with that of the Sheffield Wednesday away kit, not only is the shirt trainingwear dross, but they didn’t have shorts and socks ready in time so had players in trackie pants looking like chavs scratting about outside an off licence. 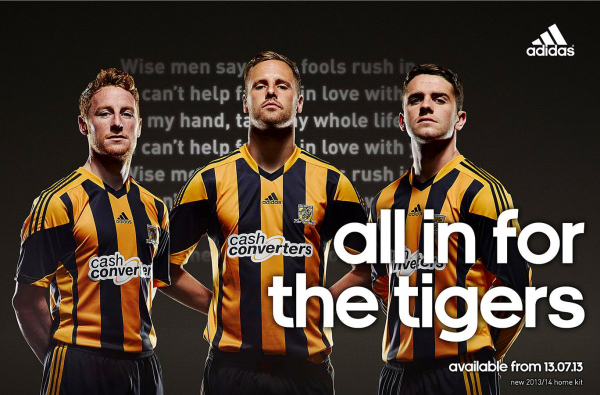 There’s really not a lot to dislike here – it’s what a City kit should be. Broad stripe, black shorts, hooped socks. I’m also really pleased we’ve gone with the template that has the striped back (no official shots of it yet but the WBA Away shirt uses the same template and that has a full striped back).

The collar treatment draws the eye a little and I’d have probably preferred a plain black trim to the collar rather than the black V but that’s nit picking.

City home shorts are hard to balls up but add in the hooped socks and it’s a smart looking, genuinely “City” City kit.

I’ve got to say it though haven’t I? The sponsor. Whilst the colouring of the sponsor allows the logo to fit into the kit better than in previous years, it’s still a low rent brand to be associated with. Shame really. The hunt is on to find an unsponsored one.

Overall, it’s been a bit of duff year for kit geeks with very little to get excited by. Everton have basically launched the same kit as last year and the England/Man City Umbro demise has led to lots of identikits, particularly for goalkeepers. Whilst it’s easy to long for the days before the blatantly obvious templating that we have now, it does feel a bit of an off year across the board.

It seems to be a year with lots of team wear that looks like trainingwear (I’m looking at you awful City away kit – but there are others) and we all know the actual trainingwear will be identikit too. It’s just a bit tedious this year.

Having said all of that, this home kit is a proper City kit. I’m a fan of kits which uniquely identify clubs and broad amber and black stripes, black shorts and hooped socks does exactly that for Hull City AFC, The Tigers…