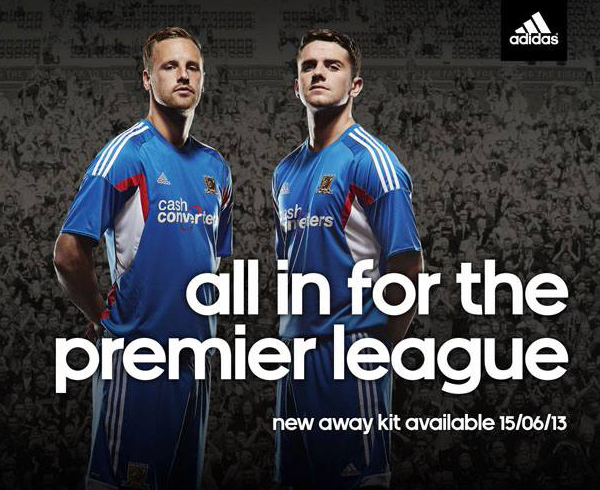 After revealing the socks on Friday, City unveiled the rest of the new away kit on Monday, posting photos on social network sites that showed Irish international’s David Meyler and Robbie Brady modelling the largely blue change kit.
HCK honcho’s JGHull and SombreEthyl disagreed rather strongly about the socks on Monday morning, so Awaykitgeddon was a real possibility after both saw the full kit…
JGHull
That’s the new away kit is it? Sigh.
I don’t hate the template – it’s actually not bad. Bolton are using it for their home kit this year and it looks pretty smart. I’m a bit bored of kits this year with so many clubs wearing the same kit and long for the days of a bit more originality. However, given we’re in the age of the template, it’s alright.
Is it a good City kit then? I don’t think so, no.
Firstly, it’s clearly a blue kit, negating my comments about that sock where I suggested we could look like Palace (I’ll be back on the socks shortly). Blue is a historic colour associated with City so being fair, that line of argument has weakened. However, *that* blue isn’t right. It just isn’t. Firstly, it’s not the correct hue for City and secondly, it makes the kit look a lot like recent training wear we’ve had.
Next up, the shorts. Template shorts, same blue. OK, not too much to hate there. Still the wrong blue, still look like training kit but match the shirt. A bit odd that the maroony red isn’t referenced in the short trim though, if you’re going to have it in the shirt.
Encasing the calves, lastly we have the socks. Those bloody not-really-a-red socks. Who thought that was a good idea? Red socks? With a full length blue kit? I just don’t get that decision at all. Having debated it briefly on Twitter, Liberia once had a blue kit with red socks and it looked insane. The marketing shots we’ve had are a teaser sock shot and then a shirt/short combo so we’ve not had the full kit in one shot yet but I just can’t get my head round that. Visually, it’s going to be mental. Surely?
If the red hint in the shirt wasn’t there and the sock was a blue, I’d be underwhelmed and moaning about the wrong blue but I’d not be hating it. As it is, the not-really-a-red colour with a not-really-a-red sock? Not for me. It looks like an England cricket 20/20 kit gone wrong.
I’ve not even mentioned the sponsor yet. I think SombreEthyl and I agree that we wish this was Karoo, Dove House or Allam Diesel Marine etc than Cash Converters. I’d take a bookies again before them. I do however think marketing has been pretty good (although I’d have cropped the background image to not include empty seats!) and the timing of the release should ensure they sell a few this weekend. Fair play for that.
Imagine it in white with amber and black hint colours. It’s better isn’t it?
SombreEthyl
We’ve covered our objections to the current sponsor to death so I’ll leave well alone here, and just focus on what it appears on.
I like it. I don’t love it, but it’s a decent, solid away kit. I’m glad it’s a blue shirt, and I’ll counter JGHull’s point about the blue not being right by stating that the blues used in 1935/36 and 1946/47 were quite different shades. The home shirt worn in the first year at Boothferry Park was quite a light blue, like the away/third kits we had in 2004-07 and 2011-13, but the blue used in 1935/36 was quite deep, described as ‘ultramarine’ and like the shade used on the civic crest at the time. This blue is somewhere in between, and I’m just fine with it.
As for the red, I think it complements the blue very well and if we didn’t use it and went with just white as a contrast colour, then it wouldn’t be different enough from the Argentina blue shirt we’re retiring. I do agree that maybe a bit more red is needed in the shirt and certainly some on the shorts to make the red socks work but I think it’s something that’ll grow on people. If there is a pair of red alternate shorts then I’d go blue-red-red at Fulham, Newcastle, Newcastle and Norwich, and blue-blue-red at Sunderland if they don’t have red socks next season.
The template appears very similar to that of our black away shirt in 2012/13, but with a simpler collar. At first that bothered me, but if we use the black shirt as a third kit then at least both change kits look like part of a coordinated set. Blue seems to have become part of a three kit rotation for our away strips, we’ve cycled through all white, blue and black and amber, and since all three have historic use I’d be happy for that pattern to continue.
In recent years adidas have made better away kits for us than home, I’m really hoping that trend is reversed this year and we have a real doozy of a home kit, preferably with a striped shirt. Given that Bolton (home) and Stoke (away) are adidas kits with hooped socks, I’m really hoping our home kit has them too as I’m a bit of a hooped sock fetishist. Come to think of it, this kit would have looked good with blue and red hooped socks as it would have connected the shirt and socks better.
Still, I rather like the new away kit. Do I love it? No, but I’d buy it.